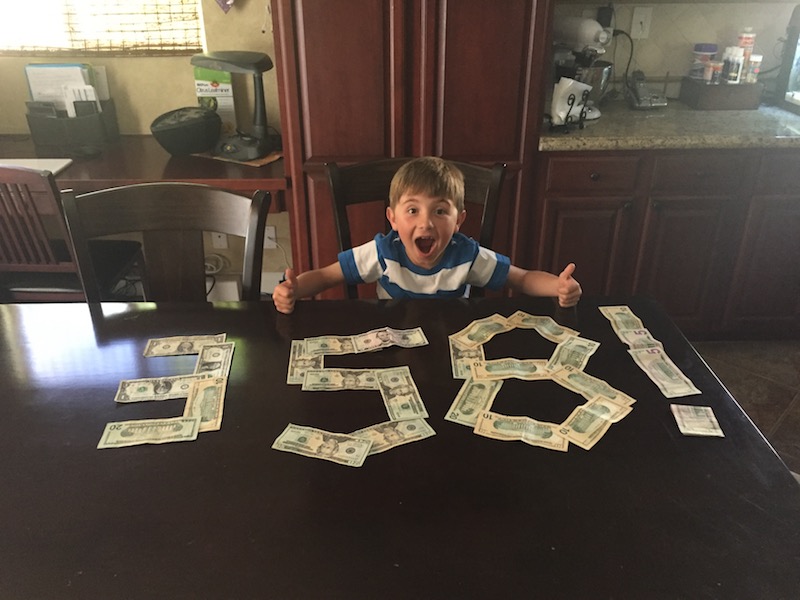 Three truckloads of cans and bottles is a lot of work but we broke Ryan’s all time record and cashed in for $358! Thank you to El Niguel Country Club, Our new customers Eric and Sharon in Westminster, all of our regular customers and friends and family. 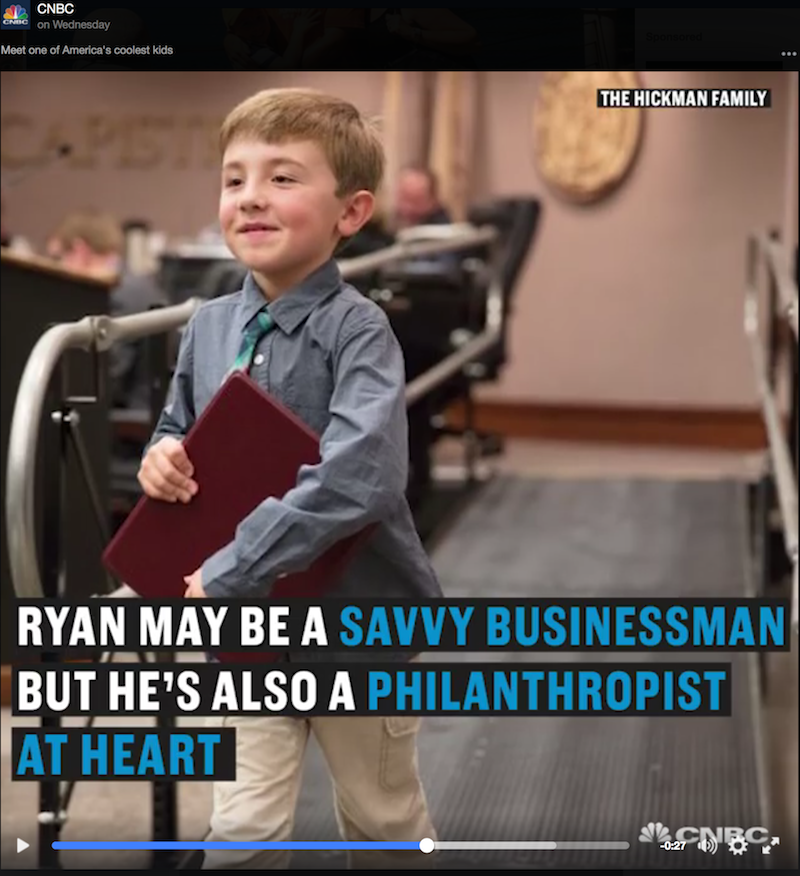 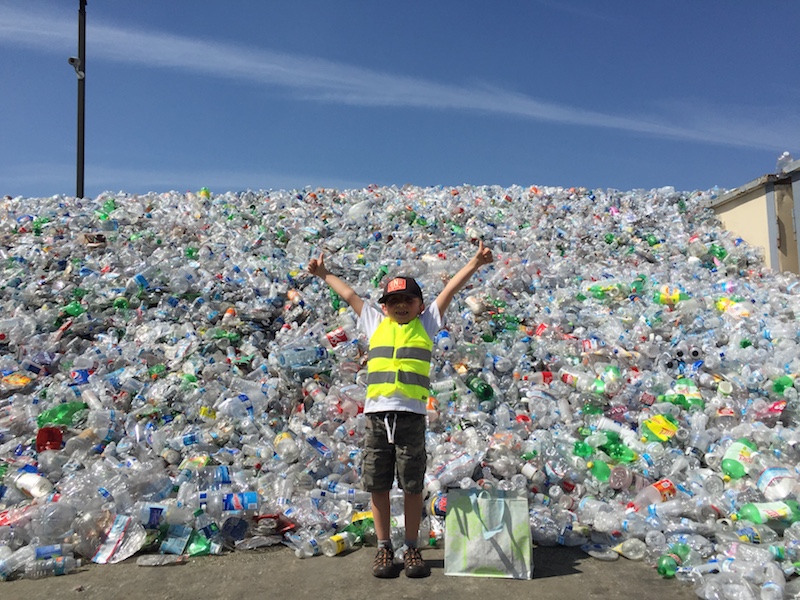 Today we got an exciting tour of RePlanet’s processing facility in Rancho Cucamonga, CA. We’ve never seen so many cans and bottles at one time. Ryan got star treatment with a welcoming committee and after posing for pics, we got to see how the recycled cans and bottles come into the center and then put into bins, ran thru the machines, squished, baled and then sent back out to be used at places like Gallo Wine or Nestle. Ryan said today was better than going to Disneyland. Best day ever.

Thank you to the awesome team at RePlanet for your 24/7 efforts to keeping the planet clean. 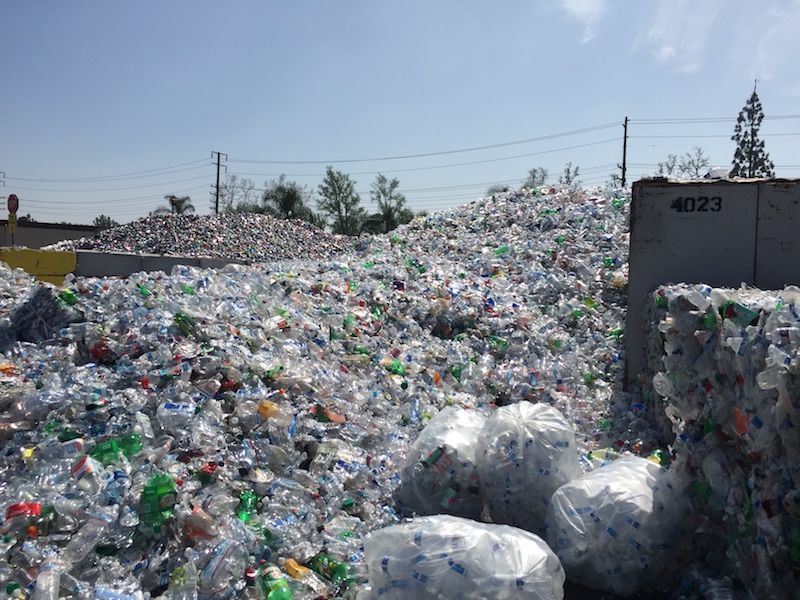 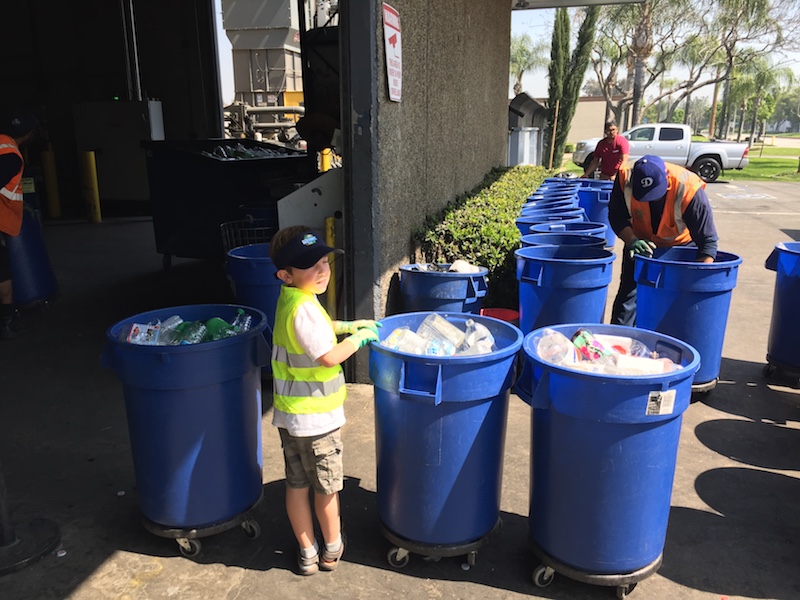 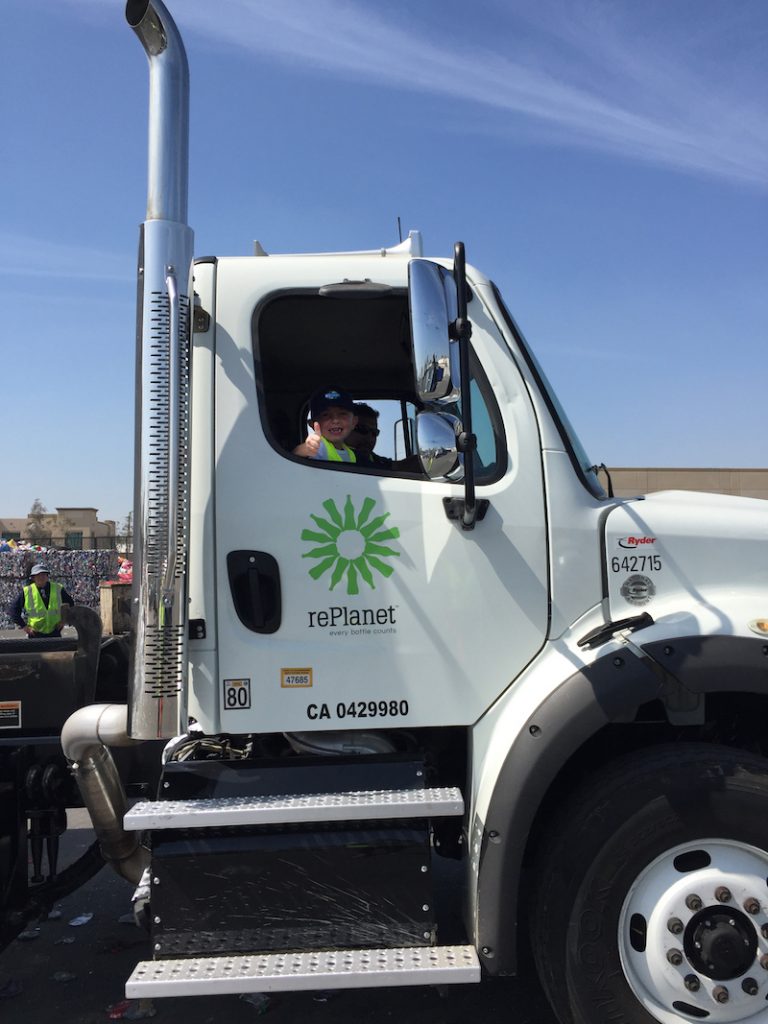 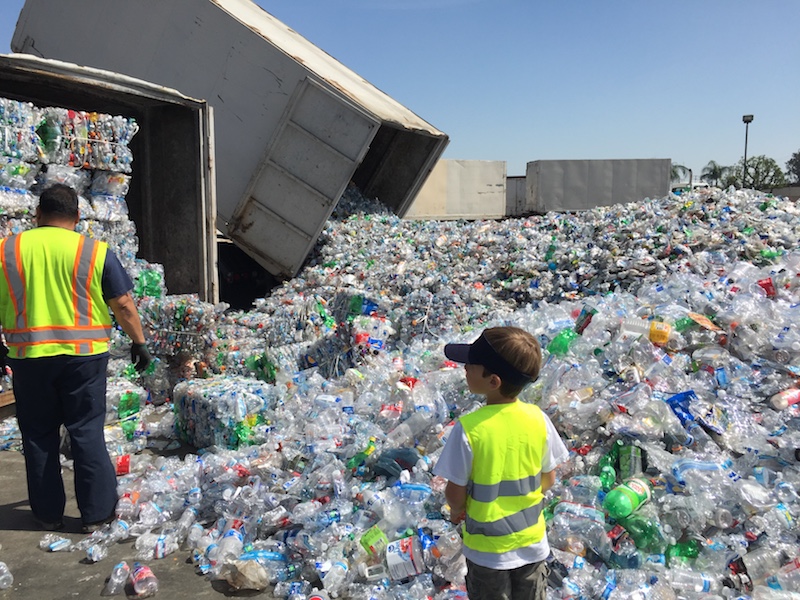 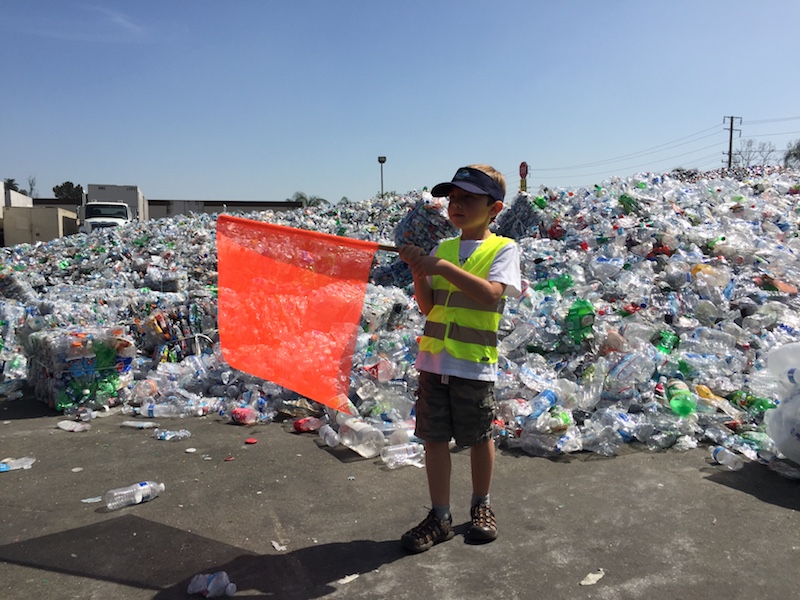 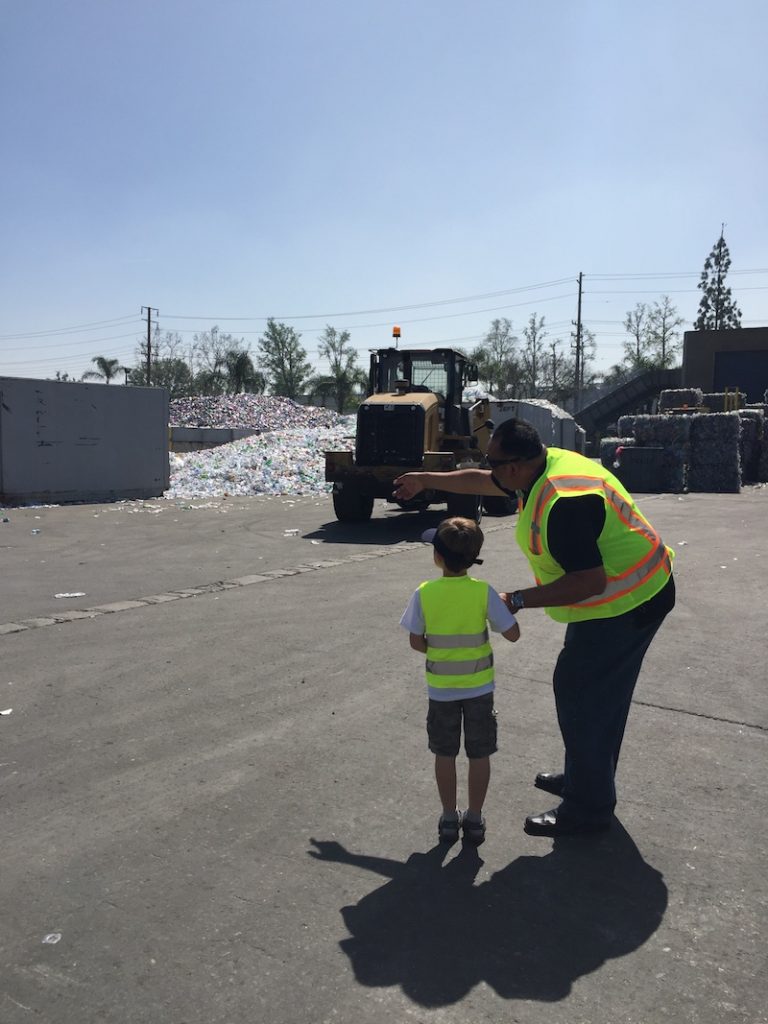 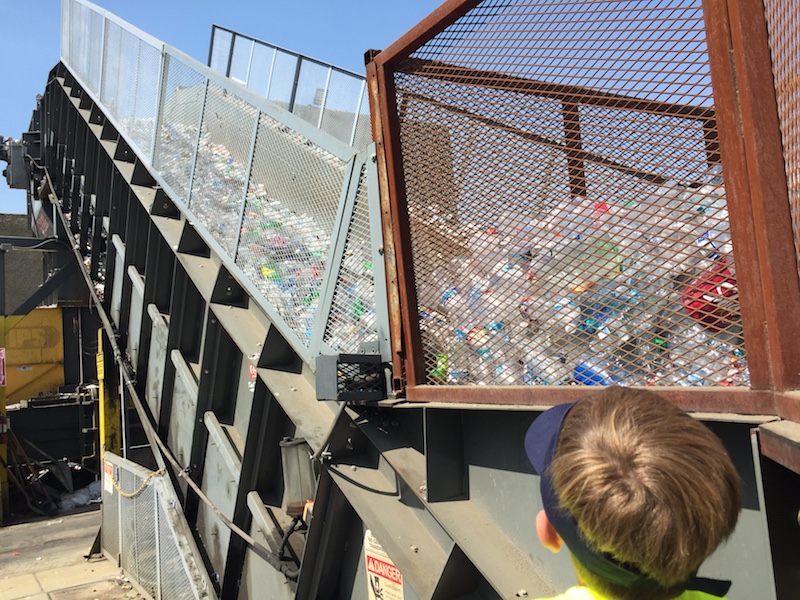 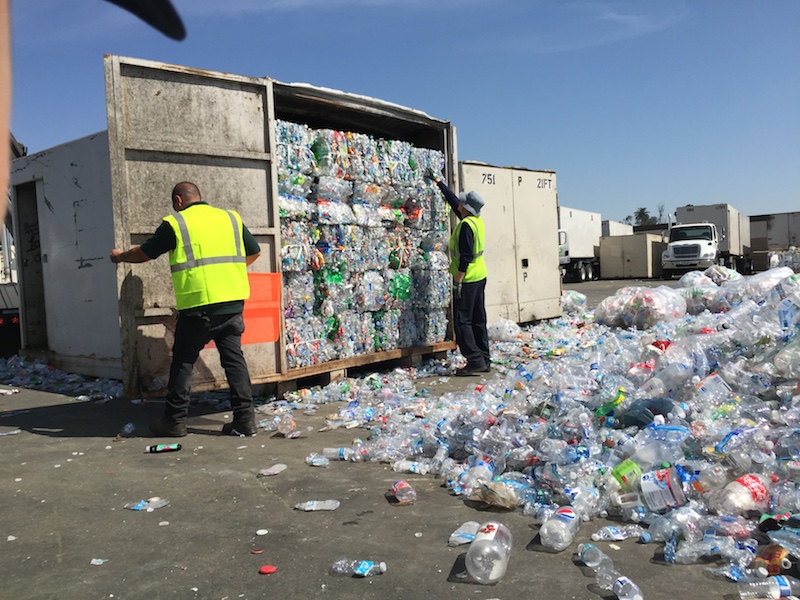 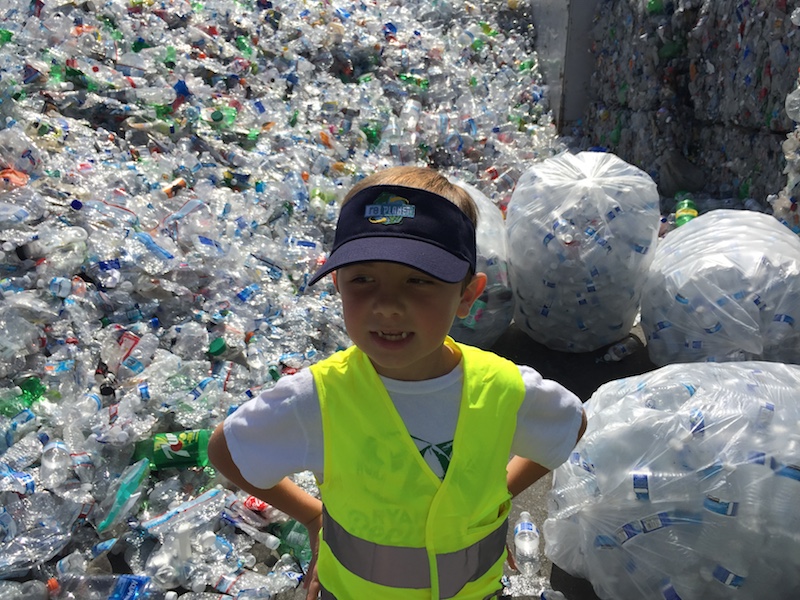 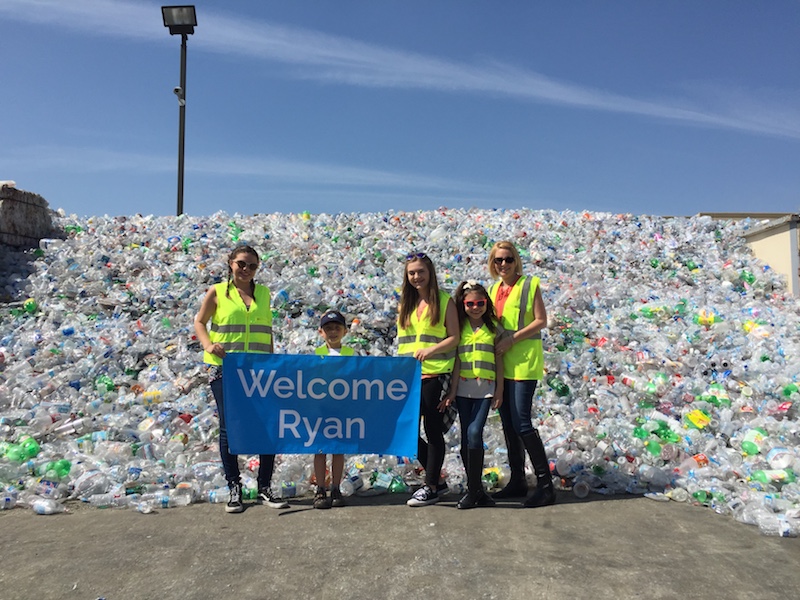 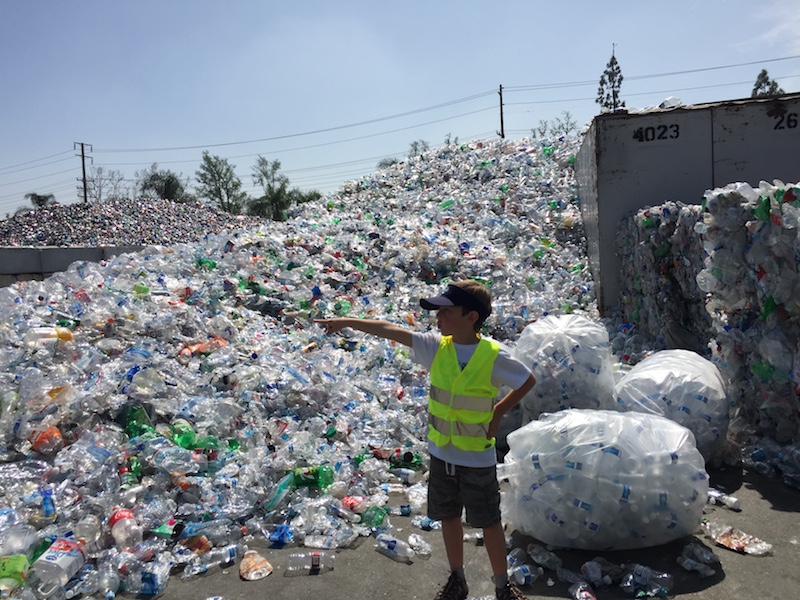 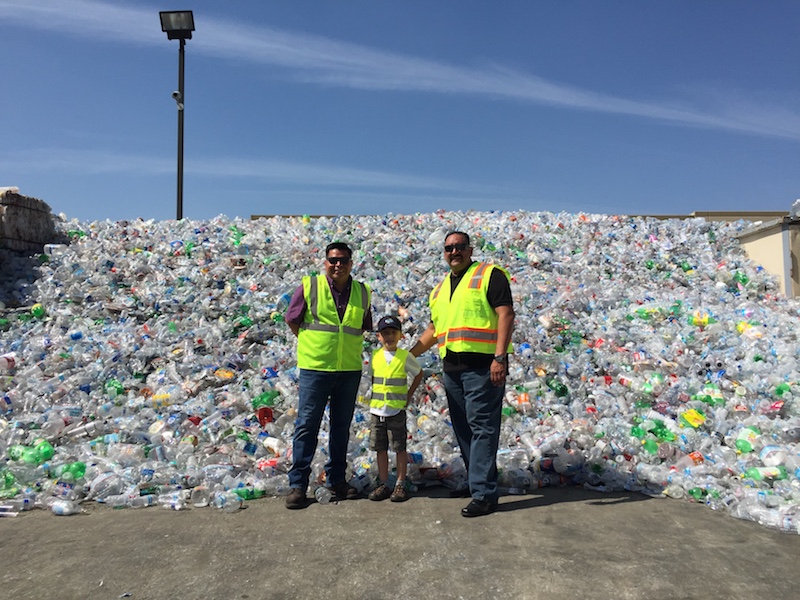 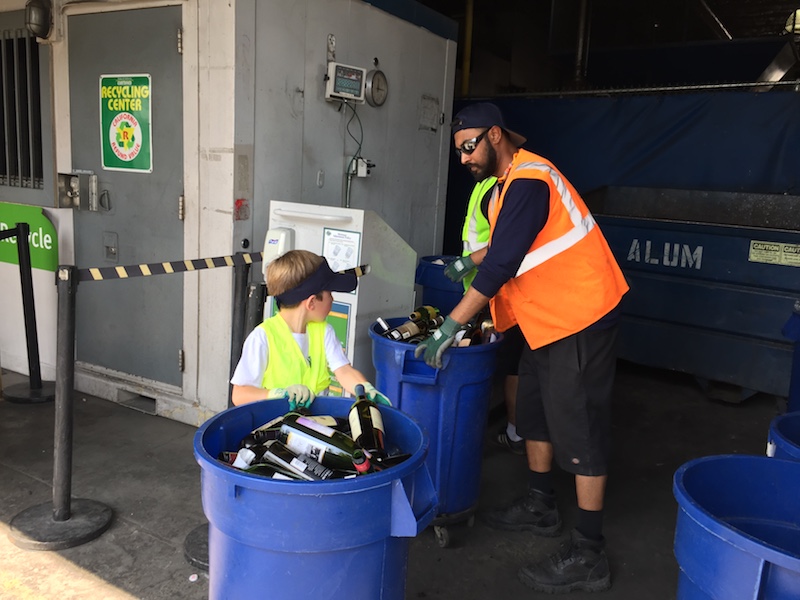 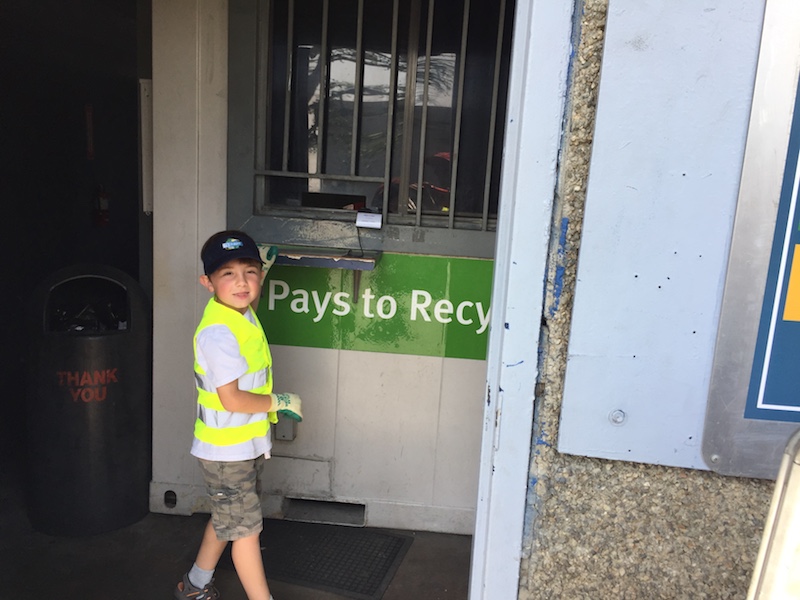 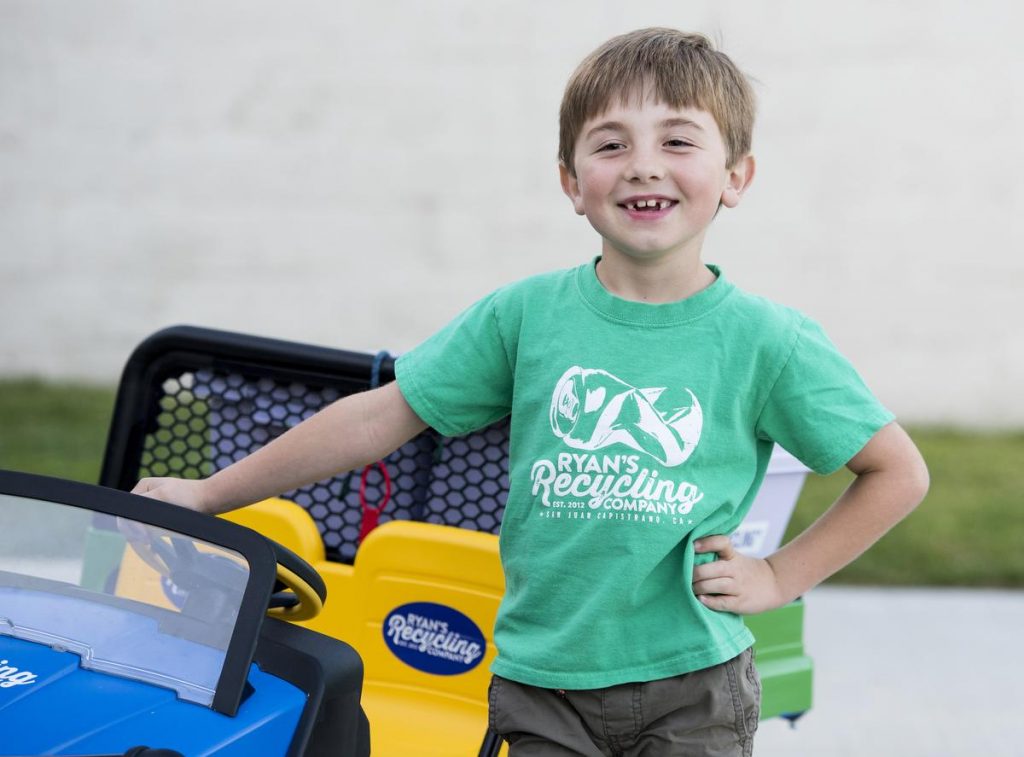 LAGUNA BEACH – Ryan Hickman smiled as he watched seven sea lions pups dive and push each other to get at fish thrown into their pool.

Suddenly, the pups jumped out and dashed across the concrete to the gate where the 7-year-old was standing. A little startled by their exuberance, Ryan jumped back and let out a belly laugh.

That competitive behavior among the 7-month-old sea lions – Onyx, Wham, Whiskers, Gin, Avocado, Kinsey and Syrah – was just the sign staff members at the Pacific Marine Mammal Center wanted to see. It showed that after two months of tube-feeding, care and rehabilitation, they were ready to go back to the wild.

“I think the fish they just ate were bought with money from my T-shirts,” said Ryan, who operates his own company, Ryan’s Recycling, and is a youth ambassador for the marine mammal center.

Ryan’s Recycling is a lucrative venture – not only for Ryan but for the sea lions.

In four years, the San Juan Capistrano boy has recycled nearly 50,000 pounds of trash and collected more than 200,000 bottles from customers throughout Orange County and beyond. By January, he had $10,000.

The story about his passion for recycling and drive to save the environment has been shared around the world. In January he appeared on the Ellen DeGeneres Show. He got a shout out on Twitter from Oakland Raiders quarterback Derek Carr and gets near-daily emails from schoolchildren from as far away as Dubai saying how much he has inspired them.

On Sunday, Ryan donated $2,000 to the marine mammal center.

“I’m helping to keep bottles and cans out of the oceans for animals not to get sick or die,” he said proudly as he handed cash and a check to Michele Hunter, director of animal care at the center.

All proceeds from sales of his bright-green T-shirts – which he started making in 2015 to thank family and friends who gathered cans and bottles for him – go to the Pacific Marine Mammal Center. The T-shirts sell for $13.

“What he has accomplished at such a young age is uplifting,” Hunter said. “Every time he comes to see us, he inspires us all to do more.”

Ryan has been fascinated by trash and recycling and the process by which it is collected since he was 3 years old, his parents said.

He loves to help his father wheel trash bins to the curb. And he is intrigued by the mechanics of the trash truck – the arm of the truck coming out, grabbing the bin and swinging it through the air to dump its contents.

Mostly, he loves the sorting – separating the glass, cans, paper and plastics from the other real trash.

Ryan’s Recycling started with a visit with his father to a nearby recycling center. He walked up with two black yard bags stuffed with plastics, glass and cans. In return he got $5.

“The next day when my dad came home from work, I told him, ‘I have my own bidness.’” Ryan said, grinning. “I decided that I would hand out grocery bags to my neighbors and ask them to collect bottles, cans and plastics.”

The next week, 10 homes in his San Juan Capistrano neighborhood had signed up. He took four bags to the recycling center and made $10.

Pleased with his rapid success, Ryan got friends, family and teachers to help. Businesses in nearby south Orange County cities jumped on board, too.

Donut Hut in San Juan Capistrano is a favorite stop. Ryan struck gold when he got El Niguel Golf Course in Laguna Niguel as a customer – he picks up at least 10 big yard-sized trash bags there every three weeks.

His efforts have spread outside California. His grandparents in Colorado bring a truckload of trash every time they visit.

Ryan’s efforts went viral in December when a story by One Green Planet, an environmental website, was published. He has been featured on ABC World News and interviewed by dozens of radio stations and even Ryan Seacrest, who gave him $1,000.

A visit to the Ellen DeGeneres show in January brought a surprise. After Ryan told Degeneres that he’d like a trash truck that looks like the CR&R trucks that come to his house, a show staff member drove out in a mini customized trash truck.

“It’s blue with purple bins,” DeGeneres told him. “Just like what you said you wanted.”

She also gave him a check from show sponsor Shutterfly to match the $10,000 he had already raised.

He now uses the truck to pick up cans and bottles in his neighborhood. As far as driving the truck, he said he’s got that pretty much under control.

“I do pretty good (but) sometimes parking it I scrape a gutter with the tire,” Ryan said.

A second-grader at Ambuehl Elementary School, Ryan spends much of his free time not with other kids but with Mr. Jose, the school custodian. Ryan helps Mr. Jose pick up garbage and sort bottles, cans and plastics.

“He spends his lunch and all recesses with him,” said his mother, Andrea Hickman. “The items sorted at school stay at the school for their recycling program. Mr. Jose sometimes refers to Ryan as ‘The Boss.’”

At home on weekdays, he sorts the recyclables when they start stacking up after doing homework. On weekends, he and his father, Damion Hickman, do pickups from collectors outside their neighborhood. They also pick up plastics whenever they find them.

“We realize that one small family doesn’t make a big difference, but if everyone did it, it would be a huge difference,” his father said. “We hope that Ryan’s story going out on a global scale has made a difference in people’s way of thinking about recycling what they can.”

Almost every day, Hickman said, Ryan gets an email about his efforts. They have come from as far away as Beijing, London and Warsaw.

“It makes me happy to see all the emails I get and I hope the people who send emails to me will recycle as well,” Ryan said. “It makes me feel good that I make an impact on the planet.”

He shared an email he had received this week from a group of first-graders at the Jumeira Baccalaureate School in Dubai.

“We are 7 years old like you,” they wrote. “You’re really helping the wonderful world. We wish we could meet you, but we are very far away. You’ve inspired us to take more action at our school and homes.”

Ryan’s mother described him as grounded, despite his visit with DeGeneres and all the media attention.

“He’s a second-grader with a passion, not a celebrity,” she said.

Saving sea lions one fish at a time

At the same time Ryan was developing his fascination with recycling four years ago, his parents took him to the Pacific Marine Mammal Center.

It was at the height of the rescues after thousands of California sea lions had stranded themselves along the California coast, prompted by changing ocean conditions and lack of food.

Ryan fell in love with the sea lions. He decided that proceeds from his T-shirt sales would go to the center for their food and medicine.

On Sunday, he checked in on the two newest young patients – Lil’ Bing, rescued Feb. 22 in Newport Beach, and Stormy, rescued Feb. 17 at Bolsa Chica.

“They’re so skinny,” he said, looking at the creatures’ ribs poking through their fur.

He watched as they gobbled from a precisely-weighed dish filled with capelin and herring.

“I hope they will start feeling good soon,” he said.

Ryan doesn’t have plans to stop recyling anytime soon. His parents say the money he’s earned will go toward his college tuition. But for now Ryan has other plans.

“I want to buy a real trash truck,” he said.