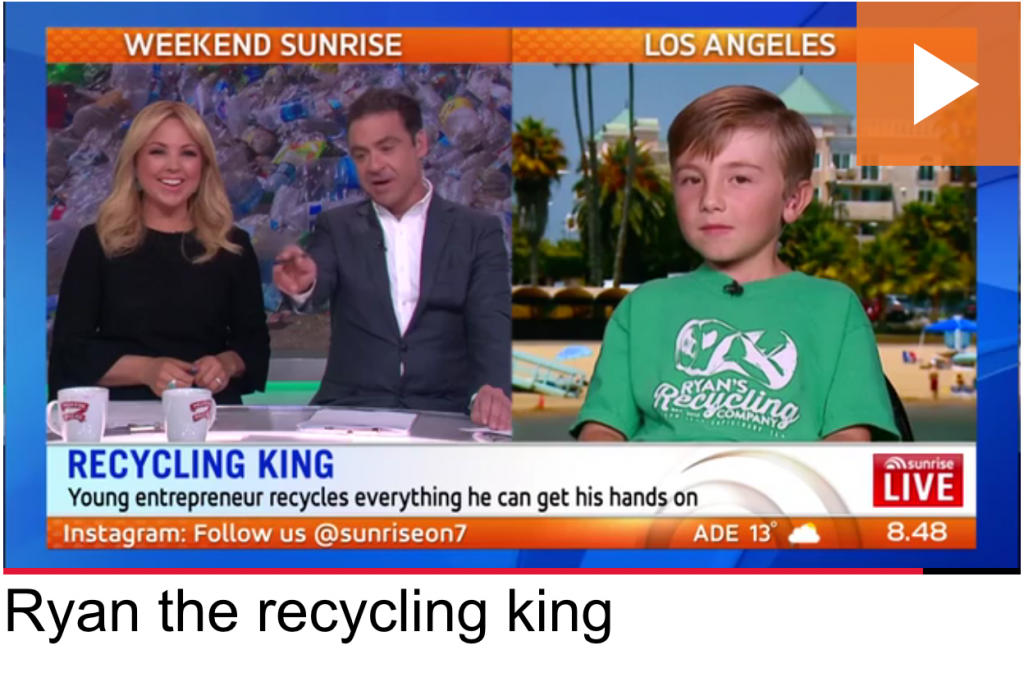 Eight-year old Ryan Hickman entered the world wanting to make it better. From the time he was tiny, he was obsessed with trash – collecting it, sorting it, recycling it, and using large portions of his proceeds to give back. His cause of choice is the Pacific Marine Mammal Center (PMMC). In just over a year, he’s donated nearly $5,000 for the care and treatment of the seals, sea lions and elephant seals rescued by the PMMC.

“Ryan’s enthusiasm and commitment to recycling is remarkable,” says Michele Hunter, the Director of Animal Care at PMMC. “He’s like a star. Every time he comes in, we all start shouting, ‘Ryan’s here! Ryan’s here!’”

At age three, Ryan accompanied his dad to the local recycling center to cash in some bottles and cans. That trip transformed his short life. The next day, he announced his plan to distribute bags to friends, family and neighbors, encouraging them to save their recyclables for him. Little did he know where it would lead. Ryan is passionate about recycling – and sea lions – luckily for PMMC

Ryan’s passion became infectious. He soon had everyone he knew – and many he didn’t yet know – contributing to his cause. Neighbors told their co-workers, teachers told their friends. Now Ryan has clients all over Orange County. He makes the rounds each week, collecting cans and bottles from businesses. He sorts, cleans, crushes, and packs them to make those regular trips to the recycling center.

“There’s never a day when he doesn’t want to recycle,” says his mother, Andrea Hickman. “Even in the pouring rain.”

“Except holidays,” Ryan says. “I need to take holidays off.”

All that collecting has translated to more than 251,000 cans and bottles, or 56,000 pounds of recycling. Recently he broke his own record for a single trip to the center, earning a whopping $542. It pays to recycle.

“Before I met Ryan,” says Andrea, “I didn’t know anything about recycling. Now we just installed solar panels in our home. That’s all because of what Ryan has taught me.”

Ryan recognized all that trash was ending up in our ocean, threatening the environment and endangering the marine life. And if there’s one thing Ryan loves next to garbage trucks and recycling, it’s animals. So he’s taken his message across the globe, encouraging kids just like him to protect the planet, letting them know – no matter how young or how small – they can make a difference.

“Whenever he comes in, we all start chanting “Ryan’s here! Ryan’s here!’”

Ryan receives letters, messages and phone calls from around the world. He recently Skyped with students in Bali. They asked him all kinds of questions about recycling—how and where and why—curious about his passion.

When Ryan and his family visited Belize earlier this year, he was recognized by the locals. A celebrity was in their midst. He was struck by how far Belize has to go in their trash collecting efforts. “If we spent a month there, just cleaning their streets,” says Andrea, “We could have made a real difference.”

So in addition to the money he makes from recycling, he began offering “Ryan’s Recycling” t-shirts for $13. All profits go straight to the PMMC, which he visits every chance he gets (and takes care of his bins, collecting their recycling while he’s there).

“Ryan’s story shows that a little kindness goes a long way,” says Hunter. “You can make a real difference in the world at a very young age.”

We are the world

Above Ryan’s bed hangs a map of the world, filled with colorful pushpins. Every pin represents a place in the world that’s contacted Ryan for a t-shirt. There’s a special breakout map of the United States in the upper corner because there are too many pins for the size of the map. “We’re big in Asia,” says Andrea. “And Europe.” The map bears that out. Europe and Asia are indeed running out of room.

Kenya, Ethiopia, Vietnam, Australia, Pakistan – they’ve all heard about Ryan and his recycling crusade. There’s even one pin stuck in the center of the Pacific Ocean. It’s from a ship stationed out there, whose crew found Ryan and ordered his t-shirts, so he packed them up and shipped them off to the middle of the ocean.

The map is not only a great lesson in world geography, it’s also a wonderful way to connect Ryan to the planet he’s trying – bottle by bottle – to save.

As we talk in the living room, Andrea tells me they just got a video from Dubai.

“In the middle east,” she tells him. “Near Saudi Arabia.”

Not content with his mother’s lack of specificity, Ryan runs to his room to look at his map. “I gotta know,” he says. “How do you spell it?” He returns to announce that Dubai is in the United Arab Emirates, and confirms there’s a pushpin to mark the spot.

Every pin means more money for the marine mammals at the PMMC. Ryan’s t-shirts translate to food, electricity, medicine and water. “All the things it takes to run the center and care for the animals,” says Hunter. To put it in perspective, he’s donated more than 10,000 pounds of fish to feed the mammals.

Sometime in 2016, Ryan’s story went viral. Ellen DeGeneres heard about Ryan and invited him on her show, donating $10,000 to his cause, along with a Ryan-sized trash truck he drives around his cul-de-sac collecting cans. (He’s a remarkably adept driver, and can parallel park better than most adults I know.) He also received a new Dell laptop from Adrian Grenier, which happened to coincide with his birthday in July. Now he can keep track of his business.

Ryan has been profiled by hundreds of web sites, newspapers, and television and radio shows around the world, including CNN, Ryan Seacrest, Bill Handel, PBS, Good Morning America, and ABC World News. He’s had shout outs from Chelsea Clinton, George Takei, and Fabien Cousteau. Congressman Darrell Issa recently visited Ryan in his home. And the Daughters of the American Revolution and the Mayor and City Council of San Juan Capistrano all presented him with awards.

Next month, the PMMC is honoring Ryan at a gala event for his contributions. “I bought a special shirt with whales on it,” he tells me.

Saving for the future

“Ryan is a saver,” says Andrea. “He doesn’t want to spend a single penny when it can be saved.” Every aluminum can earns him a nickel. Bottles are more. But, he warns, be careful about wine bottles. The recycling centers have too many and they take up too much room, so you’re not going to get as much for them.

“We’ll talk about that,” says Andrea, winking over at me. “I don’t know what the HOA will say.”

A head for trash

Even without the real thing, Ryan has a good start with an impressive collection of 18 toy trash trucks around the house. They’re stacked in his closet. He rolls them across the living room floor. “He was just born loving trash trucks,” Andrea says. “All the local drivers know Ryan. They’ll pretend to pick up the wrong can and Ryan goes wild, yelling at them to stop. It’s really cute.”

Ryan also supervises Mr. Jose, the custodian at his school. “He calls me his boss,” says Ryan. “I help him clean the campus, and I get to ride in his golf cart.”

His business has earned him entry into the CarbonLITE and RePlanet Processing facilities tours. There he’s learned how recycling really happens, from start to finish. The process is overwhelming and impressive. His website tells the tale through photos and videos.

What else does he love? SpongeBob, fidget spinners, math (“I like counting money!”), and frogs. Ryan’s room is filled with frogs. Stuffed, plastic, figurines, rugs, sheets, pictures and pajamas. None of them living pets, at least that I noticed. But they represent his favorite color—green.

I ask Ryan what he wants to do when he’s older.

“Run your own company?” offers his mom.

“Drive a trash truck,” he tells her.

“How about owning the trash company?” she says.

He looks at her. Apparently there’s more to talk about. But they have time.

In the meantime, Ryan’s entrepreneurial spirit is saving the lives of countless marine mammals here in Laguna Beach. The little man has a plan, and it’s paying big dividends for both our town and our planet.

Kermit the Frog used to lament, “It’s not easy being green.” Not only is it easy it’s fun – and profitable.

To read more about Ryan’s story, purchase a t-shirt, or donate your recyclables to his cause, visit Ryan’s website at www.ryansrecycling.com.

Check out this kid!

Eli Hartings is 6 years old and lives in Indiana. He recycles just like Ryan and he wants to save for a truck like Ryan does too! If you live near Jasper, Indiana, please call Eli to pick up your aluminum cans. Way to go Eli!

Check out his story here: https://duboiscountyherald.com/b/six-year-old-uses-smarts-savvy-to-start-business 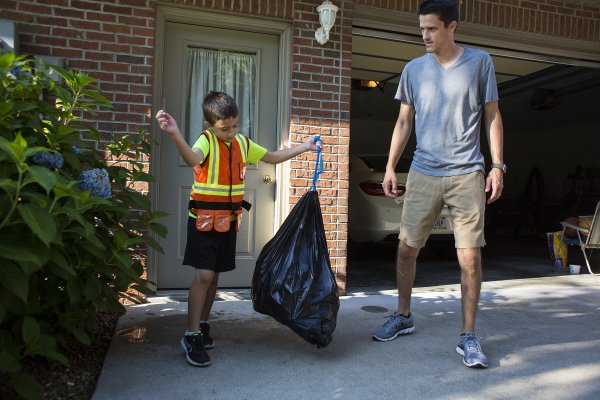 Ryan featured in the UK in the Sun! 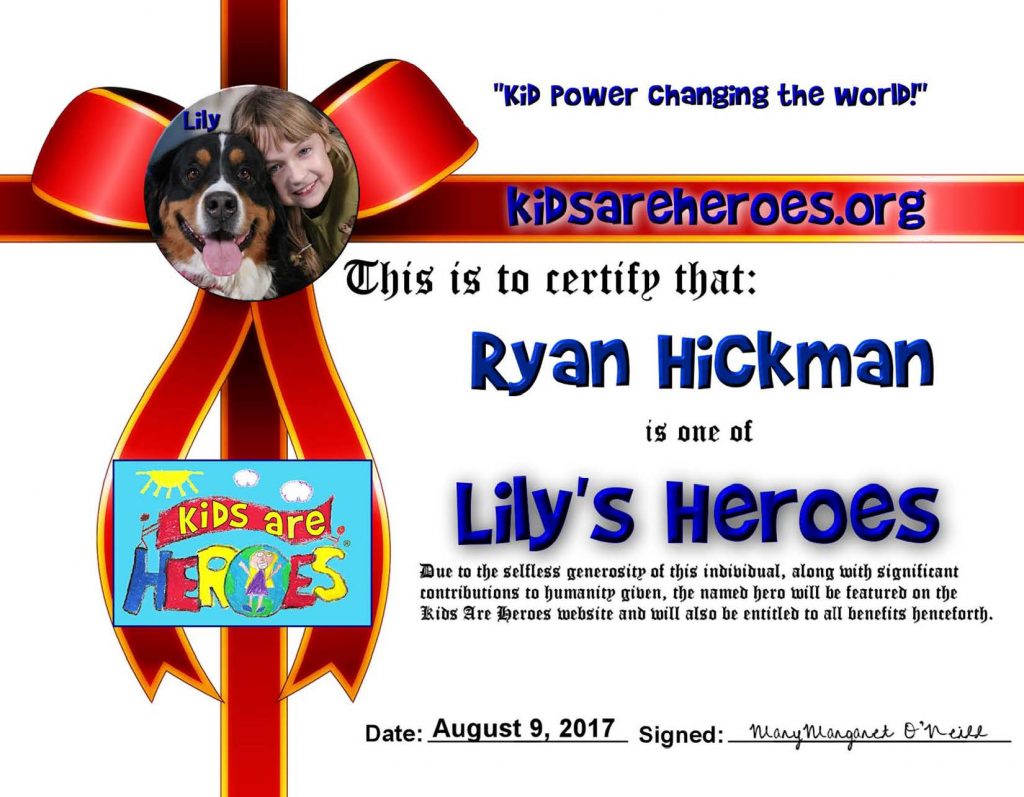 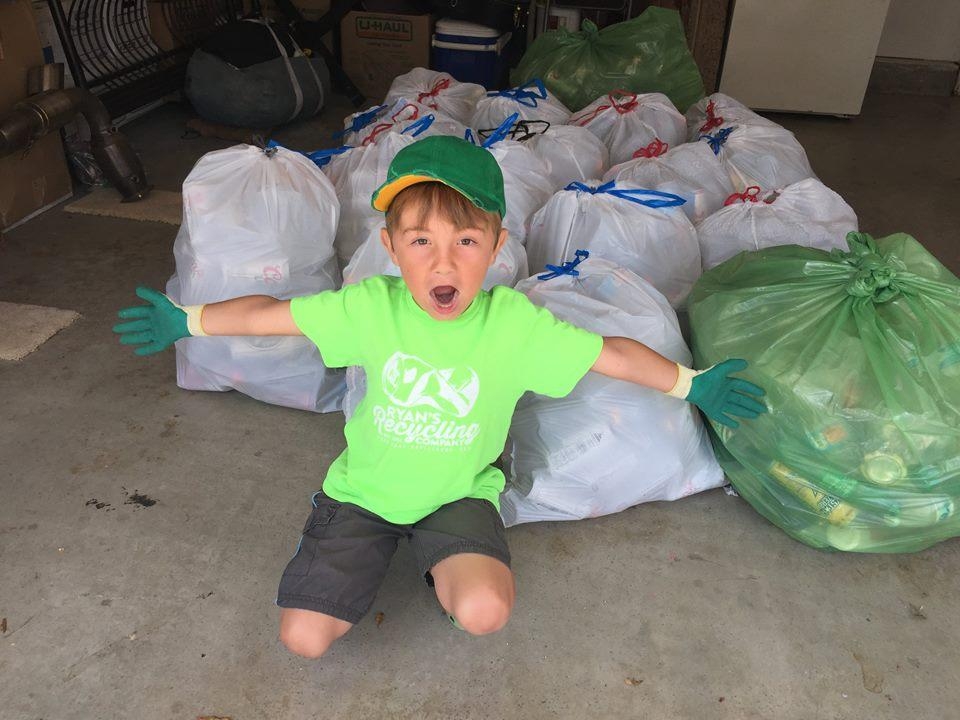 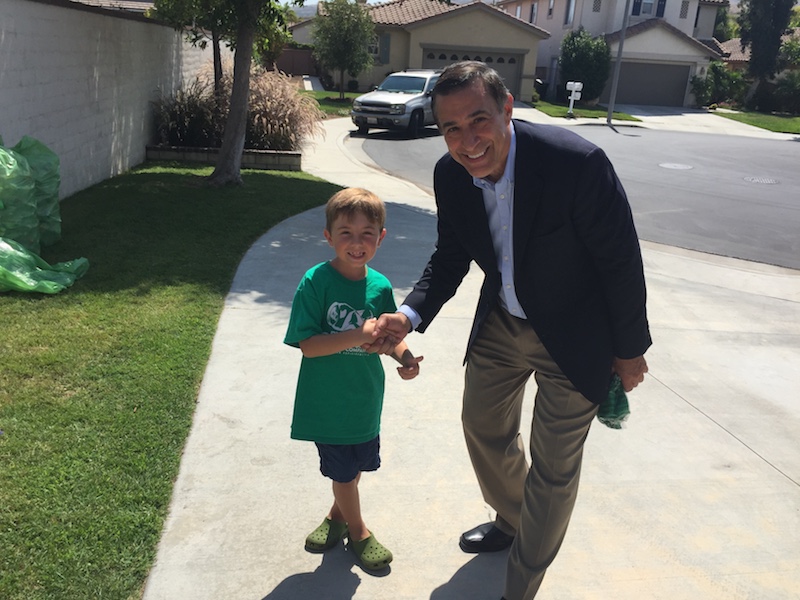 It’s not every day that you have a Congressman stop by your house to say hi and to check out your business. Yesterday was our day. California Congressman Darrell Issa visited Ryan’s Recycling Headquarters. Mr Issa talked with Ryan about sustainability and gave us some insight into how Ryan could grow his business. He also gave us some good ideas for the future and he gave Ryan a Congressional coin as a momento. Thank you to Mr Issa and his staff for making this happen. 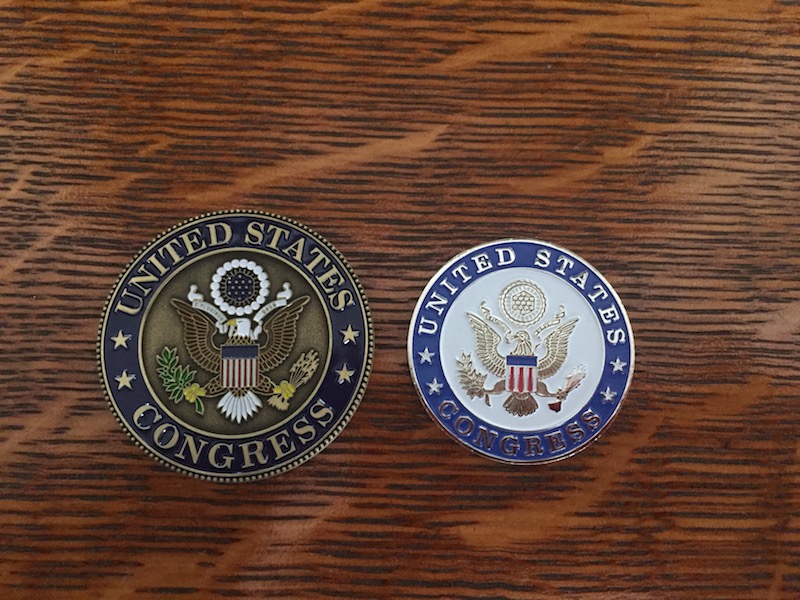 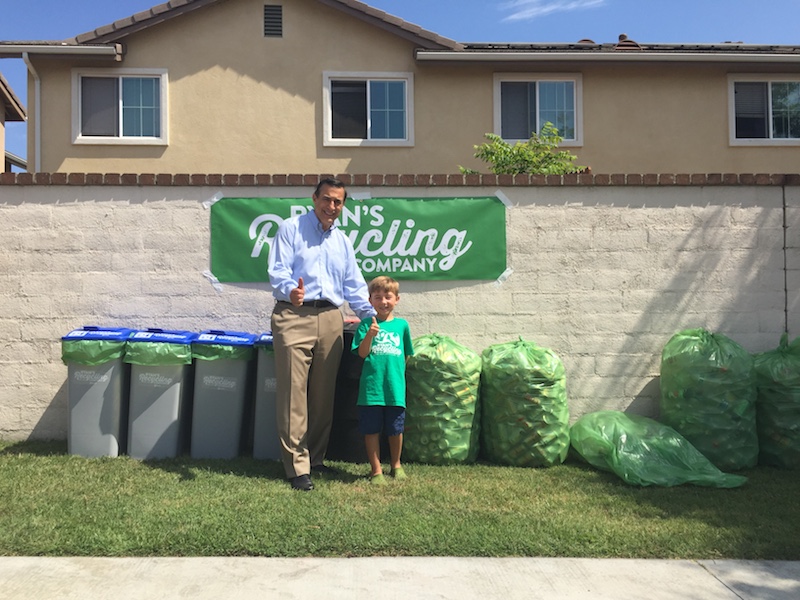 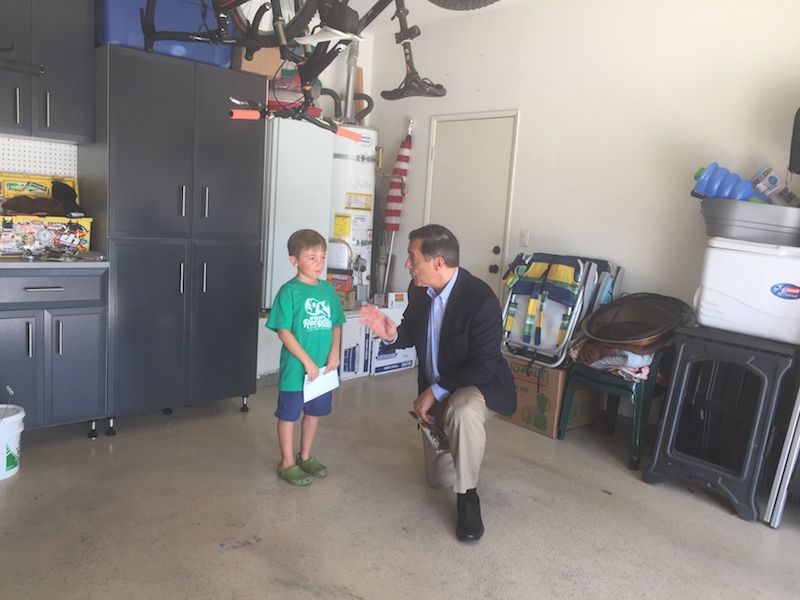 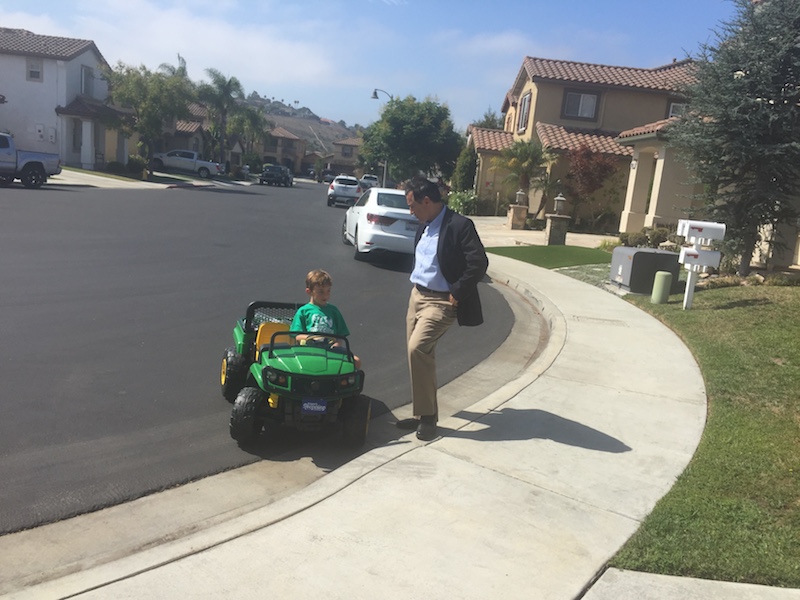 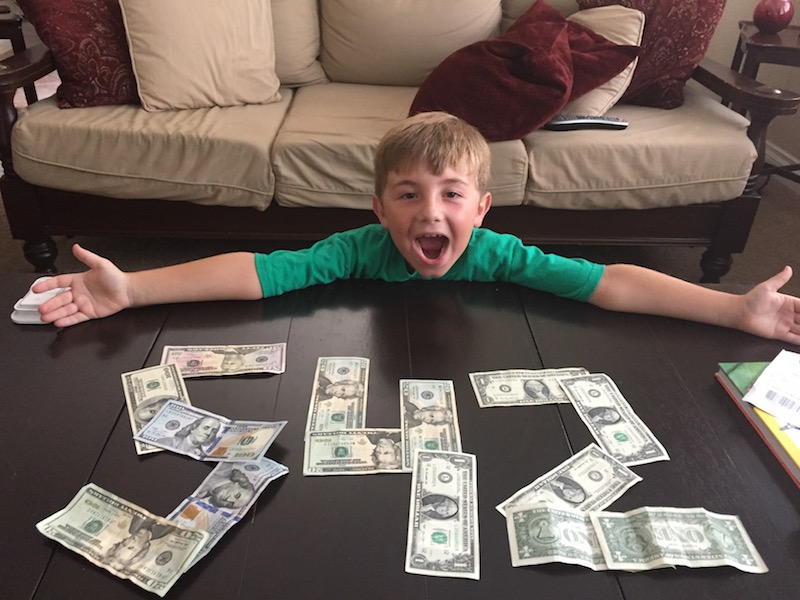 Ryan had a lot of new customers start recycling with him the past few weeks and it showed when it came time to cash in all those cans and bottles. Ryan cashed in over $540 this time and it’s his new record! Many people ask us where all these cans and bottles come from. Ryan has friends all over our local area that call to have him come pick up their cans and bottles. It’s a lot of work picking up and sorting and re-bagging but it’s worth it. Thank you everyone who helps him!